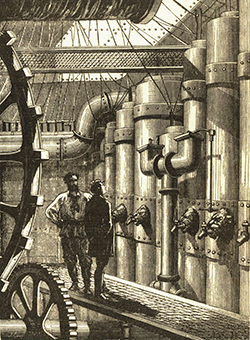 Jules Verne is one of the pioneers of science fiction.  He kept close tabs on the cutting-edge science of his day and utilized this knowledge in his writings which often made logical, if not eerily accurate, predictions concerning future technologies.  In his novel Twenty Thousand Leagues Under the Sea the submarine Nautilus is equipped with features that did not exist in Verne’s time but would become standard in the years to come.  The Nautilus is completely operated by electrical power including its propulsion, lighting and even cooking — a novel idea for any marine vessel in 1870.  Electricity was generated by what was essentially a giant renewable sodium/mercury-carbon battery, a primitive analog to today’s experimental sodium-ion batteries.  The submarine utilized fluorescent lighting several years before the invention of the electric light bulb.  Electricity was also used to distill fresh water from sea water and compress surface air into tanks.  The vessel also contained integrated airlocks from which divers wearing air tanks and regulators could enter and exit the ship.  All of this described decades before the invention of SCUBA gear.

The motto of the Nautilus was “Mobilis in Mobili” which is Latin for “Moving within mobility”.  This same motto also applies to Mobile Mind Technologies.  In Verne’s world his fantastical vessel navigated the seven seas.  In the real world Mobile Mind navigates a sea of constantly changing mobile technology while continuing to move forward and keeping an eye out for what lies just over the horizon.  We realize that we are living in an increasingly mobile world where smartphones and other mobile devices are just the beginning of what is to come.   Mobile technology is quickly becoming wearable with devices such as head-mounted displays (e.g “Google Glass”) and smartwatches (e.g. “Samsung Galaxy Gear”) just beginning to enter the market.  Flexible displays, wearable computers and smartclothes will soon follow.  And of course this will all become antiquated with the adoption of brain-computer interfaces and other cyberware. 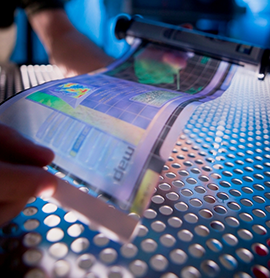 In anticipation of these revolutionary changes Mobile Mind has expanded its products and services beyond native mobile application development.   We now offer hybrid application development services and are planning to release some of our own hybrid apps in the future.  Hybrid apps allow companies with robust Web sites and infrastructures to utilize their current Web presence and investments while allowing them to enter the native OS markets.  Hybrid apps are more platform independent than native apps and therefore easier to build for a wide variety of operating systems and devices.  Hybrid apps are also easier to maintain because at least part of their content is stored on an external server.  Mobile Mind also offers responsive Web design services to select clients whose audience is more widely reached via the World Wide Web than with mobile device applications.   Mobile Web apps provide the greatest platform independence and the easiest maintenance compared to native and hybrid apps.  This flexibility and control can be extremely useful for companies who wish to readily display their online content on the widest variety of mobile devices both now and in the future.

Jules Verne embraced the newest electrical and mechanical technologies around him to create marvelous devices that at the time existed only in his imagination.   Mobile Mind embraces the latest mobile technologies to produce applications that exist on the equally marvelous but very real devices of today.  Our mobile world is constantly changing.  Our tablets, smartphones and other mobile devices were once objects of science fiction but are now almost ubiquitous.  Future technologies are certain to follow the same path and Mobile Mind will continue to move right along with them.